Posted on April 4, 2011 by HONGKONGWILLIE

Thank you for your interest in Florida Red Worms. We are a Company that specializing in a native Red Wigglers to the U.S.  Vermicomposting with native Red wigglers is a safe composting approach. Red Worms are great for turning your food left overs into compost.
OUR ADDRESS IS 12212 MORRISBRIDGE ROAD TAMPA FLORIDA 33637
Look for us at Interstate 75 and Fletcher,  exit 266 Tampa Florida Call us at 813 770 4794
This Red Wiggler is is part of a solution for eliminating part of your waste going to landfills in Tampa. Vermicomposting is the process of using Red worms and micro-organisms to turn kitchen waste into a black, earthy-smelling, nutrient-rich humus. This possess is a inexpensive way to compost and in return organic matter into rich soil.  People in Tampa interested in composting   have visited Hongkongwillie Red wiggler Farm for over 30 years.  Hong Kong Willie Red worm Farm in Tampa started in 1965,from Hongkongwillie living  on a landfill as a child in Tampa on Gunn Hwy. This making a large impact on his life. Composting with Red worms  can reduce a large amount of our waste that go to Landfills.

We ship by size of worm,which are large. On the average is 350 worms to a pound. The reason why we don’t ship by thousands or use this term is because it can be confusing. To explain, a thousand grains of sand is one thing, or a pound of sand is a something else. When ordering worms by the thousand expect worms to about the size of needle,or smaller. Shipping large worms which are like a chicken ready to lay eggs and stress less. Our Worm Farm Started in 1965. Any question call 813 770 4794 4794 .

We sell a Florida Red Worm that is native to Florida. 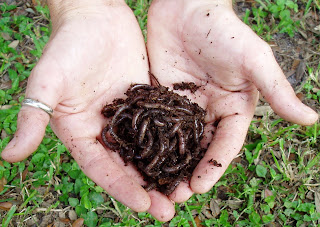 Note We sell a Florida Red Worm that is native to Florida.

This is why we with any non-native species, it is important not to allow them to reach the wild. Their voracious appetites and reproductive rates (especially among the red wigglers) have been known to upset the delicate balance of the hardwood forests by consuming the leaf litter too quickly. This event leaves too little leaf letter to slowly incubate the hard shelled nuts and leads to excessive erosion as well as negatively affecting the pH of the soil. So, do your best to keep them confined!

Note We sell a Florida Red Worm that is native to Florida.
WE DO NOT SELL

Note We sell a Florida Red Worm that is native to Florida.

From Wikipedia, the free encyclopedia

Eisenia fetida, known under various common names, including redworms, brandling worms, tiger worms and red wiggler worms, are a species of earthworm adapted to decaying organic material. They thrive in rotting vegetation, compost, and manure; they are epigeal. They are rarely found in soil, instead like Lumbricus rubellus they prefer conditions where other worms cannot survive. They are used for vermicomposting. They are native to Europe, but have been introduced (both intentionally and unintentionally) to every other continent except Antarctica, occasionally threatening native species.

Folk artist Joe Brown, better known as “Hong Kong Willie,” makes art with a message at his home/studio near I-75 Exit 266 Tampa Florida
Sometimes, it’s the smallest experiences that have the biggest impact on a person’s life.
While attending an art class in 1958 at the age of 8, Tampa folk artist Joe Brown recalled being mesmerized by the lesson. It involved transforming a Gerber baby bottle into a piece of art.
“The Gerber bottle had no intrinsic value at all,” he said. “But when (the instructor) got through with me that day, she made me see how something so (valueless) can be valuable.”
By the time class was over, Brown learned many other lessons, too, such as the importance of volunteerism, recycling, reuse and giving back to the community. He recalled being impressed by the teacher’s volunteer work in Hiroshima, Japan, helping atomic bomb survivors.
“One of the last words she ever spoke to me about that was, ‘When I left, I left out of Hong Kong,’ ” he said. After turning that over in his young brain for awhile, he decided to use it in a nickname, adding the name “Willie” a year later.
You’ve probably seen Hong Kong Willie’s eye-catching home/gallery/studio at Fletcher Avenue and Interstate 75. But what is the story of the man behind all those buoys and discarded objects turned into art?
Brown practiced his creative skills through his younger years. But as an adult, he managed to amass a small fortune working in the materials management industry. By the the ’80s, he left the business world and decided to concentrate on his art. He spent some years in the Florida Keys honing his craft and building his reputation as a folk artist. He also bought some land in Tampa near Morris Bridge Road and Fletcher Avenue where he and his family still call home.
Brown purchased the land just after the entrances and exits to I-75 were built. He said he was once offered more than $1 million for the land by a restaurant. He turned it down, he said, preferring instead to make part of the property into a studio and gallery for the creations he and his family put together.
And all of it is made of what most people would consider “trash.” Pieces of driftwood, burlap bags, doll heads, rope — anything that comes Brown’s way becomes part of his vocabulary of expression, and, in turn, becomes something else, which makes a tour of his property somewhat of a visual adventure. What at first seems like a random menagerie of glass, driftwood and pottery suddenly comes together in one’s brain to form something completely different. One moment nothing, the next a powerful statement about 9/11.
One Man’s Trash …
Trash? There is no such thing, Brown seems to say through his art.
He keeps a blog about his art at hongkongwillie.blogspot.com..
In his shop, he has fashioned many smaller items out of driftwood, burlap bags and other materials into signs, purses, totes, bird feeder hangars and yard sculptures.
He sells a lot to the regular influx of University of South Florida parents and students every year who are are at first intrigued by the “buoy tree” and the odd-looking building they see as they take Exit 266 off I-75.
Brown Sells More Than Art
Of course, the real locals know Brown’s place for the quality of his worms.
If there’s one thing that Brown knows does well in the ground, it’s the Florida redworm, something he enthusiastically promotes, selling the indigenous species to customers for use in their compost piles. Some of his customers say his worms are just as good at the end of a fishing hook, though.
“To be honest, what made me come here is that they had scriptures on the top of his bait cans,” said customer John Brin. “Plus, they have good service. They’re nice and they’re kind, and they treat you like family.”
Though Brin knows Brown sells them mostly for composting, he said they are great for catching blue gill, sand perch and other local favorites. He also added that he likes getting his worms from Brown “because his bait stays alive longer than any other baits I’ve used.”
For prices and amounts, he has another blog dedicated just to worms.
Of course, many people also stop by to buy the smaller pieces of art that he and his family create: purses made of burlap, welcome signs made of driftwood, planters and other items lining the walls of his store.
He’s also helped put his mark on the decor of local establishments too, such as Gaspar’s Patio, 8448 N. 56th st.
Owner Jimmy Ciaccio said that when it came time to redecorate the restaurant several years ago, there was only one person to call for the assignment, and that was his good friend Brown.
“I’ve known Joe all my life, and we always had a good chemistry together,” Ciaccio said. “He’s very creative and fun to be around, and that’s how it all came about.”
Ciaccio says he still gets compliments all the time for the restaurant’s atmosphere he created using the “trash” supplied by Brown. He describes the style as a day at the beach, like a visit to Old Key West. “They’re so inspired, they want to decorate their own homes this way,” he said.
It’s that kind of testimony that makes Brown feel good, knowing that others, too, are inspired to create instead of throw away when they see his work. He simply lets his work speak for itself.
“Somebody once told me to keep telling the story and they will keep coming,” he said, “and they always do.”Florida, Florida Focus,Fletcher and 75

The year was 1958. Joe Brown, 8, lived next to a county dump site in Tampa, Fla. Brown found old junk, fixed it up and sold it. Brown knew he had a higher calling in life — he was destined to be an artist.