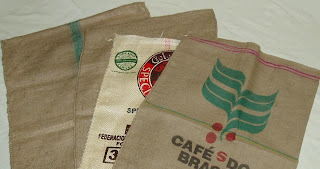 *Burlap Bags pictured are representative*
.. Used burlap coffee bean and feed bags. Great for arts and crafts. Make your fashion statement, whether it be hand bags or use in furniture arts and crafts, burlap bags have many uses. 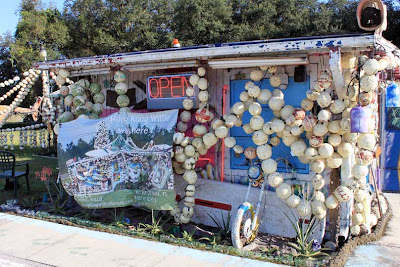 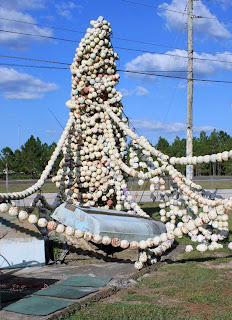 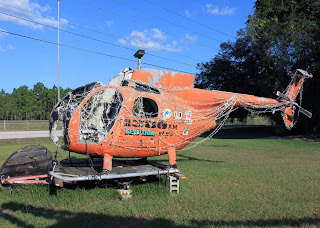 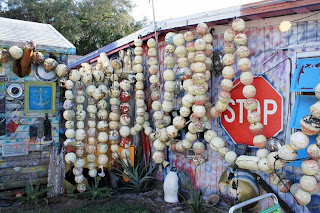 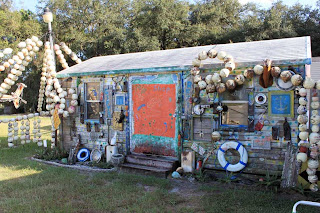 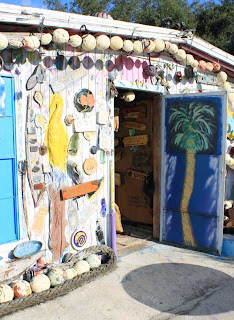 Hong Kong Willie.
Seabird plaques, sea glass, melted bottles, painted driftwood
and rusty objects are a few of the items that decorate the wood panels.
Entrance into the small building, which is lined from ceiling to floor
with burlap Bags from South American coffee roasters. 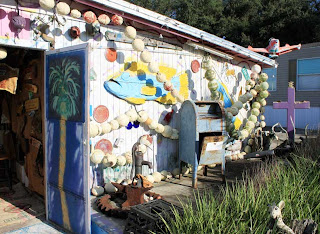 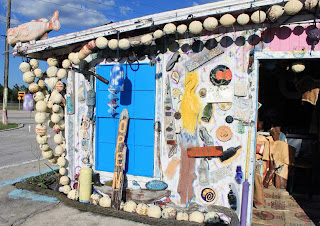 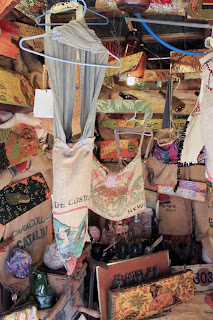 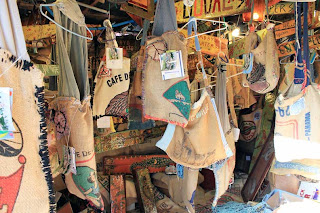 Recycling as a Lifestyle and a Business
By:
Chris Futrell, Florida Focus
TAMPA, Fla. – Have you ever seen the building on the corner of Fletcher and I-75 with a bunch of buoys strung everywhere? This small business that many think is an old bait n’ tackle shop is actually Hong Kong Willie.
Derek Brown, 26, and his family own and operate Hong Kong Willie. The little shop specializes in preservation art. The artists don’t take preservation too lightly either.
“99 percent of everything that has gone into a piece of art has been recycled and reused,” Brown said.
Just as unique as the art is, so is the company’s name. Brown says the name was created by his father, Joe Brown, in the 1950s.
“My father being in an art class, being affected by a teacher, they were melting Gerber baby food bottles,” Brown said. “The teacher interjected that Hong Kong had a great reuse and recycling program even then.”
Brown’s father then took that concept and later added the Americanized name Willie to the end. And that’s how Hong Kong Willie was born as a location that offers recycling in a different and creative way.
Hong Kong Willie artists are what are known as freegans. Freegans are less concerned with materialistic things and more concerned about reducing consumption to lessen the footprint humans leave on this planet.
“I’m sure everyone has their own perception of a freegan, possibly jumping into a dumpster or picking up something on the side of the road,” Brown said. “There [are] people who will have excess. There [are] also things that can be trash to one man, but art or a prize to another man.”
Brown and his family carry this practice through to their art. It’s his family’s way of life, turning trash, which would otherwise fill up landfills, into an art form.
The Brown family gets a lot of their inspiration for their art from the Florida Keys. In fact, this is where the deluge of buoys wrapping around the ‘Buoys Tree’ came from, the fishermen of Key West.
“It is Styrofoam, we understand that it does not degrade, but to blame the fishermen for their livelihood wouldn’t be correct, instead we find a usage for those,” Brown said.
Brown said there’s a usage for everything, even the hooks to hold the painted driftwood, which are also salvaged, to the wall are old bent forks. Everything’s reused here. Purses made out of old coffee bean sacks to “kitschy,” as Brown described it, jewelry made from old baseballs.
“Hong Kong Willie truly believes that a piece, whether it’s a bag or a painted artwork, it’s meant for one person.”
Hong Kong Willie. The name of the artist. In 1958 his mother took Hong Kong Willie to an art class. The name started then. An art teacher when doing crafts out of Gerber baby bottles, made a statement, in Hong Kong reuse was common. At that time he thought this was very interesting. His father had low-land, at that time landfills were common also. The county had told Hong Kong Willie’s father, it was safe, but as we now know this was not so. Something can come from bad to be good. Hong Kong Willie the name came from that art teacher impressing on that young mind that objects made for one use could be for many other uses. Hong Kong for the neat concept. Willie for an American name. So for many years Hong Kong Willie had a life of reuse. Hong Kong Willie saw forms in a different light, His life now was meaningful, knowing this was and would be his life. Art made from found objects, making less of a footprint on this world. Art and art teachers, HOW IMPORTANT. For the ones that have, and the ones who have not. Media can be found. Now 50 years later, we know now being green is important. We need to look at this very carefully. Our children and our world need a different understanding. Objects can be used in many different ways. Hong Kong Willie the tons of objects in his life that have been used, without much change, So for that art teacher what she did for my life. Thank You. I still have the Gerber baby bottle till this day. Hong Kong Willie.
www.etsy.com/shop.php?user_id=6006857
search.yahoo.com/search;_ylt=A0SO8ZmD26ZKJQkAUlX7w8QF;_yl…
http://www.bing.com/search?q=hong+kong+willie&amp;amp;amp;amp;amp;go=&amp;amp;amp;amp;amp;form=QBLH&amp;amp;amp;amp;amp;qs=n
hongkongwillie.blogspot.com/2009/02/used-burlap-bags-for-…
apreservationist.blogspot.com/2009/03/used-burlap-bag-for…
hongkongwilliesart.blogspot.com/2009/03/coffee-bag-or-sac…
en.wikipedia.org/wiki/Gunny_bag
en.wikipedia.org/wiki/Burlap

Artist Born for this time, Lived on a landfill as a child. Reuse Became the way of life. To read the story from the inception of the Name Hong Kong Willie. Famed, by the humble statements from the Key West Citizen, viable art from reuse has found its time. To Live a life in the art world and be so blessed to make a social impact. Artists are to give back, talent is to tell a story, to make change. Reuse is a life experience. Hong Kong Willie Art Gallery In Tampa, a reuse Art Gallery. Artist Kim,Derek,and Joseph. reuse artist that have lived the life and are meant for the green movement in the world. A gallery that was born for this time. Artist living a freegan life,art that makes a social statement of reuse. Media that has a profound effect in making the word green truly a movement of reuse in the world today and the future.
View all posts by HONGKONGWILLIE →
This entry was posted in Burlap coffee bags wholesale, Eisenia foetida+worms+European Night crawlers+tampa+florida, hong+ kong +willie, tampa tourist attraction. Bookmark the permalink.