Posted on July 8, 2011 by HONGKONGWILLIE
LANDFILLS ARE FOREVER
Landfills are forever, like massive coffee percolators. This is the reason we should explore other uses of our refuse.

Follow this link. Update to how a landfill CATASTROPHE can be.


Watching the Paint ,a Great exploding of Colors from the truck hit the pit. What a memory. Was this the beginnings of Green for i. 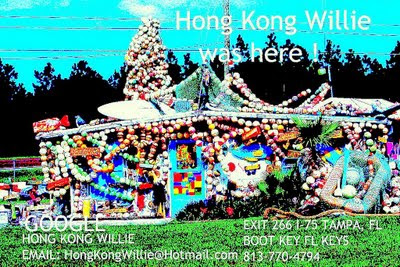 Artist Born for this time, Lived on a landfill as a child.

Reuse Became the way of life. To read the story from the inception of the Name Hong Kong Willie. Famed, by the humble statements from the Key West Citizen, viable art from reuse has found its time. To Live a life in the art world and be so blessed to make a social impact. Artists are to give back, talent is to tell a story, to make change. Reuse is a life experience

This is a excerpt from a study OF THE LANDFILL (CITY DUMP) HONGKONGWILLIE LIVED ON.. Follow this link
Gunn Highway Landfill
The Gunn Highway Landfill is located off Gunn Highway in Tampa, Hillsborough County, Florida. The county operated the landfill as a trench-type facility for the disposal of MSW from 1958 to 1962. The landfill disposal areas occupied approximately fifteen acres. After the landfill was closed, the property was subdivided and developed. A total of thirteen apartment buildings and a clubhouse were constructed over the waste-filled areas of the landfill. According to an investigation report by a consulting firm, see Geraghty &amp;amp; Miller (1996), the foundations for these structures were built as follows:
The complex is founded on timber piles and post-tensioned concrete structural slab systems due to the subsurface conditions. The construction drawings approved by Hillsborough County for the apartment complex indicate that a synthetic membrane was to be installed beneath the slabs to block and disperse the migration of methane gas, generated by the decomposition of solid waste.
Even though efforts were made during construction to prevent methane gas generated by the waste from seeping into the structures, problems were discovered in the late 1980′s. In addition, differential settlement of the waste has resulted in cracks in the overlying structures in spite of the attempt to establish an adequate pile foundation system for those structures.
Numerous investigations have been conducted at the property evaluating whether methane gas has migrated into the on-site structures and evaluating the potential for the gas to migrate off-site through utility trenches containing electrical conduits, sanitary sewers and stormwater pipes. Some gas monitoring data report methane gas concentrations in the soils at levels significantly higher than 100 percent of the lower explosive limit (LEL) for methane. Methane gas has consistently been detected under the slabs at the clubhouse and at many of the apartment buildings. Fortunately, methane gas has not been detected in the first floor apartments. Additional ventilation has been added to on-site structures and concrete floors have been resealed to try and minimize the risks from methane gas accumulation. While investigators now believe that the levels of methane gas are decreasing at the site, indicating that the Gunn Highway Landfill may have passed its peak methane generation rate, gas monitoring is still continuing and is likely to be required for many more years.

It,(was the dump) that had all this media, and a young enterprising mind. Not enough time to capture it all.

Landfills are forever, like massive coffee percolators. This is the reason we should explore other uses of our refuse. Follow this link. Update to how a landfill CATASTROPHE can be.

Lithia, Florida — A sinkhole that opened up under a Bay area landfill has county authorities on edge This event Happened in December of 2010.

Then the smell hits. Like the sour stench that puffs up when you tie up a kitchen trash bag.

Famous artist raised on Tampa city dump,like living in the Penthouse in the upper east side. A brand meant for this time. Hong Kong Willie. The name of the artist. In 1958 his mother took Hong Kong Willie to an art class. The name started then. An art teacher when doing crafts out of Gerber baby bottles, made a statement, in Hong Kong reuse was common. At that time he thought this was very interesting. His father had low-land, at that time landfills were common also. The county had told Hong Kong Willie’s father, it was safe, but as we now know this was not so. Something can come from bad to be good. Hong Kong Willie the name came from that art teacher impressing on that young mind that objects made for one use could be for many other uses. Hong Kong for the neat concept. Willie for an American name. . Now 50 years later, we know now being green is important. We need to look at this very carefully. Our children and our world need a different understanding. Objects can be used in many different ways. Hong Kong Willie the tons of objects in his life that have been used, without much change, So for that art teacher what she did for my life. Thank You. I still have the Gerber baby bottle till this day. Hong Kong Willie


While digging for a swimming pool, man finds a landfill in his back yard,Friday, July 8, 2011.

Artist Born for this time, Lived on a landfill as a child. Reuse Became the way of life. To read the story from the inception of the Name Hong Kong Willie. Famed, by the humble statements from the Key West Citizen, viable art from reuse has found its time. To Live a life in the art world and be so blessed to make a social impact. Artists are to give back, talent is to tell a story, to make change. Reuse is a life experience. Hong Kong Willie Art Gallery In Tampa, a reuse Art Gallery. Artist Kim,Derek,and Joseph. reuse artist that have lived the life and are meant for the green movement in the world. A gallery that was born for this time. Artist living a freegan life,art that makes a social statement of reuse. Media that has a profound effect in making the word green truly a movement of reuse in the world today and the future.
View all posts by HONGKONGWILLIE →
This entry was posted in city dumps, city landfills, dumps, Garbage dumps in Florida, hillsborough county landfill tampa, landfills, landfills in Florida, Sanitary Landfills in Florida. Bookmark the permalink.